Hydromechanical processes of separation of heterogeneous systems in the gravitational field of the Earth are widely observed in nature and are widely used in technology, being implemented in devices that, depending on their technological purpose, are referred to as sedimentation tanks, thickeners or to various sorts of classifiers.

In large-scale industries, these capacitive, large-sized devices are considered as building systems. There are horizontal, vertical, radial and other sedimentation tanks.

The use of cassettes with thin-layer elements in sedimentation tanks intensifies the process of separation of heterogeneous systems up to 10 times, which, during the reconstruction of existing facilities, can significantly improve the qualitative and quantitative indicators of their work.

High-performance sedimentation tanks, thickeners with thin-layer cassettes have small dimensions, which allows them to be completely manufactured at the factory and delivered to the site by road as ready-made units for SKD on site.

The supply of thin-layer sedimentation tanks, thickeners in the form of finished devices significantly reduces the volume of design and construction work.

The device of a vertical thin-layer settler (thickener) for separating the pulp, pretreated with a flocculant. 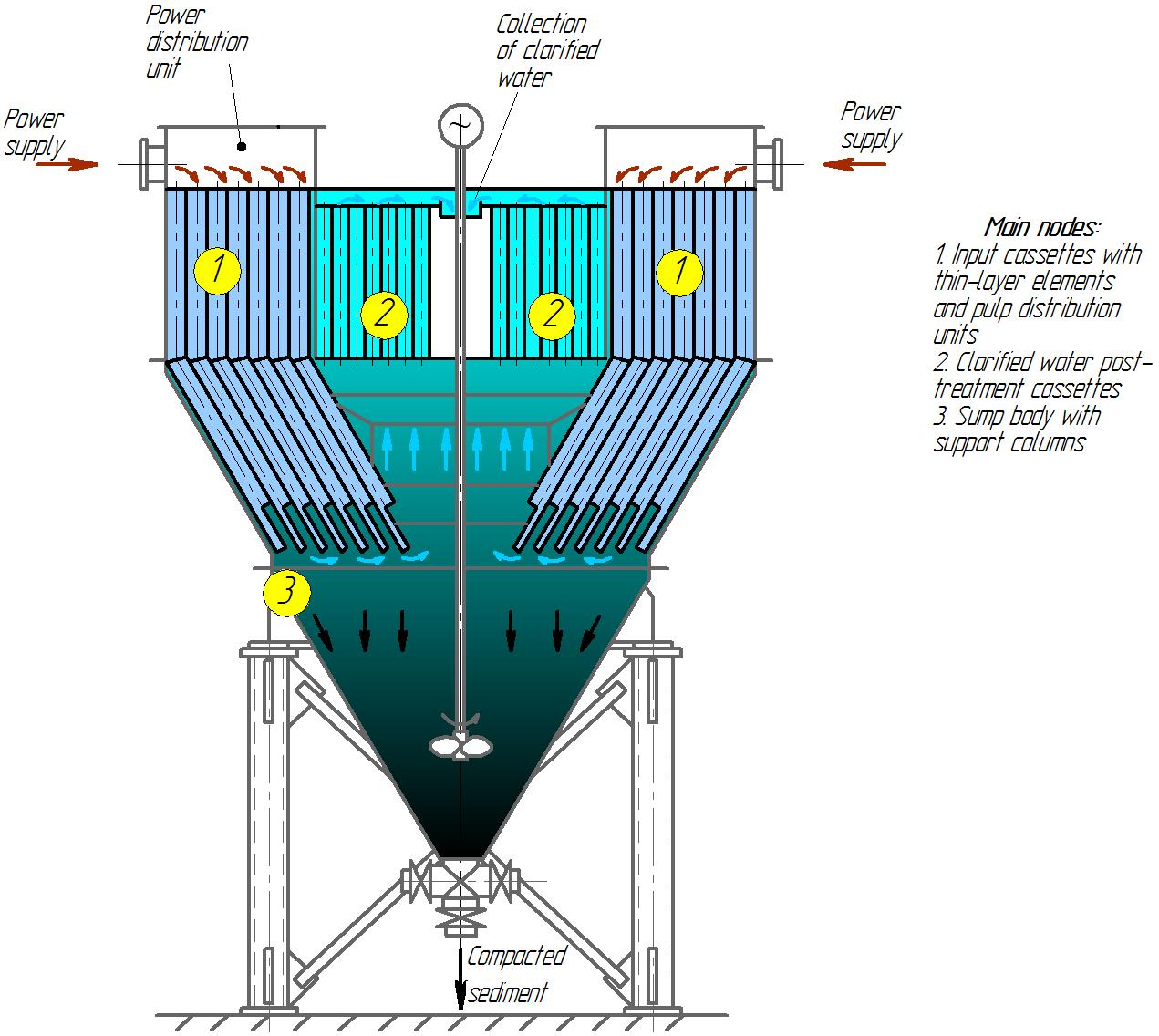 During the operation of the sump, slurry enters the inlet cassettes with thin-layer elements. Pulp is understood as the mixture of solid particles and liquid in which they are suspended. According to the particle size, pulps are distinguished: coarse suspensions, thin suspensions, sludge (sludge). The pulps fed to the settling tank can be conditioned by the addition of coagulants or flocculants.

To organize a uniform supply of power to the thin-layer elements, the input cassettes are equipped with power distribution units.

The direction of movement of the clarified liquid and condensed in the thin-layer elements of the input cassettes coincide, i.e. currents straight-through, descending . Such designs are preferred for slurries with a relatively high solids concentration.

Further, the sludge of the cassettes enters the pyramidal bottom of the sump, where sludge compaction takes place. Sludge compaction is intensified by stirring with a stirrer.

The discharge of sludge from the settler (thickener) can be continuous or periodic , which is determined by technological objectives and material balance.

Clarified water rises through a post-treatment cassette with thin-layer elements, in which the movement of the additional purified liquid is ascending , the direction of the clarified water and thickened are opposite , i.e. current countercurrent .

Lightened water is collected in a tray and then, through the collection of clarified water of the sump, it is removed by gravity into the external network.

The main unit of a thin-layer clarifier is cassettes with thin-layer elements formed by parallel plates or tubular channels, which allow developing a sedimentation surface of the settler and organize optimal hydrodynamic conditions for separating heterogeneous systems.

Fig. 2. Scheme of separation of a heterogeneous system in a thin-layer cassette element.

The settling slurry collects on the lower wall of the channel and slides down the channel, forming a thickened sediment sludge.

The length of the thin-layer element and the flow rate of the pulp through it are selected in such a way that the processes of separation of the pulp are completed at the exit from the element.

The shape of cassettes with thin-layer elements in the plan can be square, rectangular or segmented to maximize the filling of the internal space of the sump.

The initial data for the selection of a settler (thickener) and the selection of thin-layer cassettes are the results of a laboratory analysis of the pulp . The results of slurry separation are determined by the laws of sedimentation or floating of suspended solids in a liquid and are illustrated below:

The results of the operation of thin-layer sedimentation tanks as part of the Sludge Water Treatment and Waste Dewatering Module are shown below.